Rajagopal was in the news recently for his exchange with Babul Supriyo, the Bharatiya Janata Party leader and union minister of state for environment, who had called him up seeking an “amicable apology” for an unflattering coverage of the September 19 fracas at Jadavpur University involving him and the students. The bone of contention was the screaming headline, “Babull at JU”. It was a pun on the idiom “bull in a china shop” and Supriyo was reportedly offended by it. Rajagopal told the minister that it could mean anyone since the line below spoke of “untamed protestors”. Rajagopal’s retort to Supriyo—“I am not a gentleman. I am a journalist”—was much quoted by the liberal press, which hailed him as a hero for keeping the resistance going.

Rajagopal is hardly happy. “A journalist should never make news,” he says at the beginning of the interview. “A journalist should report news and never become the news. Whenever it happens (unless it is about some big achievement) it means something is wrong with journalism.” Crediting the limelight to an unfortunate situation arising because most journalists do not do what they ought to, he feels there’s nothing to be proud of. “I have done nothing extraordinary; I am just doing my job.”

Rajagopal has been “just doing” his job for 30 years now. Having begun with the Malayalam daily Venad Pathrika in 1989, the 51-year-old editor worked with The Economic Times and Business Standard—where he often ended up doing political pages which was “unglamorous work” in pink papers—before joining The Telegraph in 1996. He captained the news operations at The Telegraph for more than a decade before he took over as editor in 2016.

The Thiruvananthapuram lad has lived in Delhi and Mumbai, but it is Kolkata—or Calcutta, as he calls the city in The Telegraph style—that he fell in love with because it is a “lot like Kerala”.

In an exclusive interview, Rajagopal speaks to The Kochi Post on journalism in the times of Babul Supriyo, The Telegraph’s front pages and, yes, the “Aunty-National” headline, why Kolkata is like Kerala and why you should not, or rather should, become a journalist:

Is this the first time in your 30-year career you got a call from a minister asking you to “amicably apologise”?

Yes. Nobody ever demanded an apology like that. We used to get calls from ministers and senior officers earlier too, mostly complaining about mistakes. It is not that we were always right. When we were wrong and they right, we have accepted their point and issued apologies. It is the standard practice; a minister doesn’t have to call. No one needs to call. A letter or email will do.  If any mistake is brought to our notice, we take note. This case was different. The very language (“F***ing sold out.”) he used was uncalled for. Looks like it’s becoming normal now (to treat journalists like that).

Is this reflective of the state of media and press freedom in our country?

Yes, it is. It is now a cliché to say: “In the Emergency, they (journalists) were asked to bend and they crawled.” Now, they are doing so without even being asked. During the Emergency, there was a direct attack on civil rights and personal liberty. This is far worse. We just caved in without anyone having to lift a finger.

Is it too difficult to stand up to the government? What is the pressure like?

If you take a critical look at our work, something which some senior journalists have also pointed out, it is not that we are breaking too many stories. We are just holding up a mirror and reporting what we see and hear around us. It is not that we are digging out some hidden things. We are stating the obvious facts. Even so, we have to be constantly on our guard. We spend more time in fact-checking nowadays; fortunately, there are videos available. So, the earlier ploy of being “misquoted” or “quoted out of context” does not work anymore. But the fear of making a mistake is constant. Earlier, if we made a mistake, then we could make a correction and issue an apology. Nowadays, a single mistake can cost you heavily. So, what we used to check ten times earlier, we do 20 times now.

Why do you think journalists are afraid to stand up to the government? Far from opposing, they (mainly television media) do PR for the government.

I think most do it because they think this is what people want.  Some of them claim to have the largest viewership. It’s like the movies, they want to give what they think the people want. If the ratings are authentic, it would appear that large sections of our country now like what is being dished out as news.  It is as if our primordial instincts have been unleashed. I hope that it will run its course.

So, the buck stops with the readers and viewers?

Yes. The readers and viewers will have to decide what kind of media they want in this country.

Your front-page headlines and layouts are talk of the town. Every time there’s a major event or incident, The Telegraph front-page is most awaited. How do you produce them?

There’s a team (behind the frontpages). We work together. I listen to what everyone has to say. In the case of “Babull At JU” (Sept 20, 2019) there was a shortlist of seven headlines.

Speaking to People TV last year, you said “Aunty National” was one of your best headlines. Why is it so?

Yes, it was. It was a very good pun and very aptly conveyed the story.

It also attracted a lot of controversy, many found it sexist.

People said that we were profiling Smriti Irani by calling her “aunty”. That was not our idea. Context is very important here. It was during the middle of the JNU fracas, students were being beaten up on court premises and were sent to lock-ups; they were being picked up and arrested. All kinds of atrocities were happening on students. They are our future. In the middle of all this, the minister who is in charge of education stands up in Parliament to give a very nationalistic, jingoistic speech. She even said something like she will cut off her head (in her exchange with Mayawati). She was projecting herself as some kind of a big mother of nationalism. And she said that the slogan-shouting students were no children, suggesting that they had been mobilised against the State. Therefore, the headline. It (to make a sexist comment) was not our intention at all. 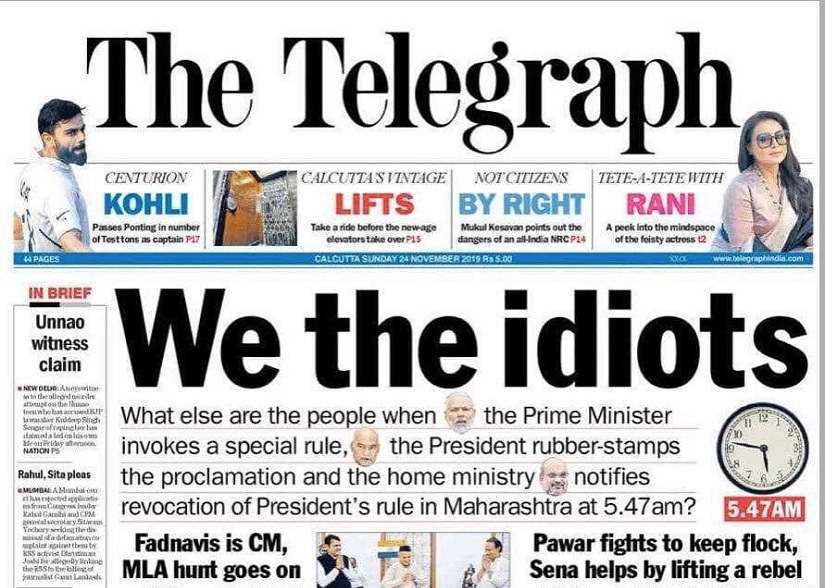 “These days, I constantly remind myself of an exchange between Ben Bradlee and Katharine Graham in the movie, The Post.

Bradlee: If we don’t hold them accountable, who will?

Graham: We can’t hold them accountable if we don’t have a newspaper.”–Rajagopal