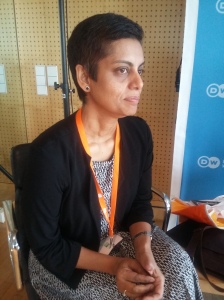 Brutal killing of bloggers has become some sort of fashion in Bangladesh of late. Every once in a while there are headlines of some free-thinking bloggers being killed or injured in attacks by religious extremists. Therefore, it was only fitting that the Deutsche Welle decided to confer its BOBS (Best of the Blogs) award in activism to Mukto-Mona, a blog started by Avijit Roy who was slain by millitants in February this year.

The awards ceremony was held as part of the Deutsche Welle Global Media Forum, held in Bonn from June 22 to June 24. Roy’s wife, Rafida Bonya Ahmed, received the award and expressed hope that it would encourage Bangladeshi bloggers to carry on their good work, fearlessly, just as they’ve been doing so far. But, asked if the award would be a message to the extremists, she said she didn’t see any such possibility.

I caught up with Ahmed for a brief conversation before the ceremony. She shared with me her unhappiness at the lack of government action in checking religious extremism in Bangladesh. She sees no hope for justice, yet is unwavering in her fight for the freedom of expression.

Please click here to read the full story on Scroll.in.

I was invited by the Global Media Forum to attend the three-day conference on the topic, Media and Foreign Policy in the Digital Age.