A limp German flag hangs from a string at Ballygunge Phanri (in South Calcutta) on a rain-soaked day. I ask the taxi-driver to slow down for me to take a picture of it. I wanted to mail it to my friends in Germany. “They will be happy to know their team has supporters here,” I tell the taxi-driver. This gets us talking about the World Cup and football.

The cab-driver turns out to be an Argentina fan. “I live in Argentina para (locality).”

“There are some Brazil supporters in my para too. But very few.” He almost sounds like saying, “We are all tinnomool. There are some bampantis in our para, but they don’t matter. ” 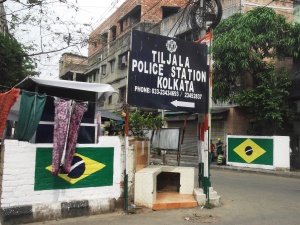 Ever since the World Cup began, several Argentina and Brazil paras have mushroomed all over the city. From Ballygunge Phanri to my house at Picnic Gardens (about two kilometres), I cross at least three such paras. Temporary gateways at the entrances of the lanes patronised by the local youth clubs announce which para you are entering. Palpara Argentina Club’s gateway has images of Maradona and Messi all over. White and blue festoons and streamers adorn the narrow lane. The Brazil lanes are similar sights in yellow and green.

Someone tells me, the Brazil-Argentina divide is very much like the Mohan Bagan-East Bengal divide. It’s about your identity. You wear it on your sleeves.

However, no incident of violence between the rival camps have been reported from the city so far. On the contrary, the relation seems friendly in some places–Brazil and Argentina flags fluttering in the same air in all their political correctness.

While these two Latin American teams are the most popular, support to the other World Cup-playing nations are also to be found in the different nooks and crannies of the city. Germany comes third by my assessment of the street-display of emotions; but still far, far away from the top two.

All this has lent an air of celebration to the city. Massive flags fall all the way from the sky and flex banners of star players are stretched tight by crude coconut ropes at various bends and crossings. Auto-rickshaws (which should by default be Brazil supporters given their yellow-and-green colour combination) have small flags flying on the top, just the way you see during political rallies.

Walls, which till a few weeks ago had political graffiti asking you to vote for the Trinamool Congress or the CPM, now have flags or images of Messi, Neymar and Ronaldo painted on them. The flowers and leaves of the Trinamool Congress logos were whitewashed overnight as local youth club boys marked their territories. This is Argetina wall. This is Brazil. This is Portugal.

It is important to support a football team. And people announce their support in the same manner as they do their political or religious identities. It’s as if your support to the team defines you.

Sometimes in the sea of Brazil’s yellow and green, you spot a lonely black-red-gold flag. You at once imagine in the midst of fanatics a young person, a rebel who has stood his ground.

It feels like festival here and I’m going to miss the World Cup once it’s over. As it nears the end of its month-long extravaganza, I’m already getting the feeling one gets after the Durga Puja, in the days following Dashami.

By the way, did you hear that the Kolkata Municipal Corporation early last month decided to give a tax waiver to buildings painted in white and blue? The timing is highly suspect, though there is no word yet on whether the move was to drum up support for Argentina.